Government agency of the Canadian province of Ontario that is responsible for managing and protecting its natural resources, maintaining provincial parks, and monitoring and suppressing forest fires.

Located in east-central Canada, Ontario is the second largest Canadian province in total area. Most of the province’s boundaries consist of lakes and rivers, including the Great Lakes at the southern border.

The terrain in southern Ontario is mostly comprised of rolling hills. Vast boreal forests cover the northeast, and the northern part of the province is characterized by tundra landscapes and is mainly swampy and sparsely forested. There is an absence of any significant mountainous terrain throughout the province.

The climate ranges from subarctic in the north to a humid continental climate in the south, generally with warm-to-hot summers and cold winters. The area also experiences dramatic temperature changes due to the Great Lakes, and severe snow and ice storms are common.

The climate varies from subarctic in Alaska, tropical to subtropical in southeast, to Mediterranean and temperate along the West coast. 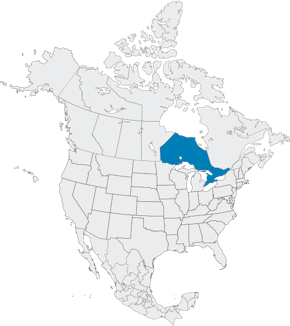 The Ontario Ministry of Natural Resources has been an FTS customer since 1984.