Agency within the United States Department of Agriculture that manages public lands in national forests and grasslands.

The U.S. Forest Service manages all public-owned forests within the United States. In the eastern half of the country, the terrain is comprised of coastal plains with deciduous forest cover. In the southern states, tropical forest cover is not uncommon due to the warm climate. West, the Rocky Mountain range gives way to the Great Basin region, and further west the Sierra Nevada and the Cascade mountain ranges run the length of the coast. Here, the climate is Mediterranean and oceanic and coniferous trees are predominant within these regions.

The United States includes most climate types, such as the frozen Alaskan north, the arid plains and prairies, and tropical zones in the Hawaiian islands and Florida keys.

The dry plains and forested areas are often prone to wildfires, both of natural and human causes in the hot and dry months. Extreme weather is not uncommon for the region bordering the Gulf of Mexico, as the area is prone to hurricanes in the summer months. 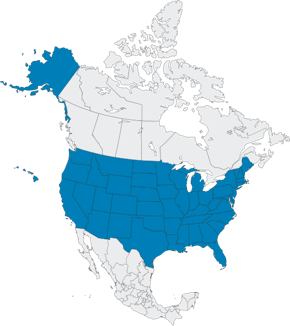 The U.S. Forest Service has been an FTS customer since 1990.